It's a bit difficult to get into the Hanukkah spirit when your neck of the woods has been suddenly transformed into a frigid arctic hellscape. And if you're anything like Rickey, you've waited until the last possible moment to do all your holiday shopping and spent a large chunk of the brutally snowy weekend schlepping to malls. Oh joy. But on the bright side, at least no one can blame Rickey for the failing economy--he certainly did his part. (Did you?)

Anyhow, in hopes of distracting our readers from the worries of the wintery world we've decided to share a bit of culinary nourishment with you, something to draw you up from the depths of the flu season and warm your cold cold heart and unfreeze your credit assets. That something is Rickey's most excellent matzo ball soup recipe. So forget controlling the media and Hollywood and all the world's financial institutions--that's child's play. No, Rickey wants to seize control of the inner workings of your very kitchen as well. For this concoction, you will need the following items:

Why is Rickey directing you to make your own broth? Because the canned equivalent is bland, full of sodium, and completely unauthentic. In a word, it is nebbish. Good matzo ball soup needs a soul. If your matzo ball soup broth is clear enough that you can see the bottom of your bowl, then something has gone very wrong, and quite frankly, Rickey doesn't want to know you or be your friend. We're shooting for serious turbidity here people. The plan to achieve this is simple: place all the broth ingredients in a large pot, add water, and bring it to a boil. 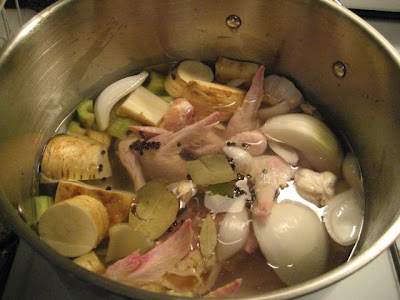 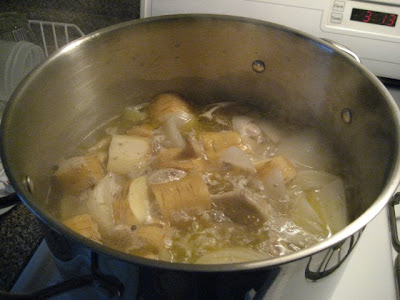 Reduce the heat and gently simmer the broth, uncovered for 3 hours. Marvel as your abode fills with the most incredible scent known to modern civilization: a primordial earthy, chickeny, vegetably sort of essence. Looking for something to do to kill time while the awesomness brews? Go watch the appropriately semitic State & Main like Rickey did, it's a terrific little uplifting movie, and a nice change of pace from some of Mamet's drearier stuff. When the three hours of simmering are up, pour the stock through a strainer into a large bowl and discard all the solids. The leftover scraps, having lent their essence to the broth, will look something like this: 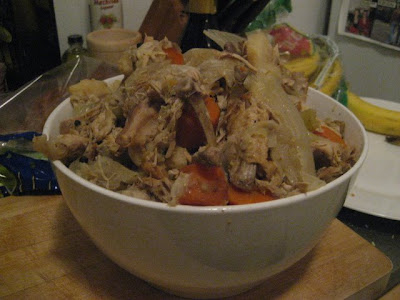 If you have a pig, or similar ravenous barnyard animal, this would be an excellent thing to feed them. Having discarded the scraps, what you're left with here is pure manna. The potent liquid essence of three hours of simmered chicken parts, celery, carrots, onions, garlic, and parsnips. If some sort of vengeful chicken god were to emerge from the cloudy depths of this broth and stomp menacingly around your kitchen, don't say we didn't warn you. This stuff is pure dynamite. Skim off and discard any fat that floats to the surface (oh yes, there will be plenty of fat). Reserve a few tablespoons of the skimmed fat to use in the matzo balls.

For the matzo balls, mix all the above mentioned matzo ball ingredients in a bowl. Cover and place in the refrigerator for 30 minutes. 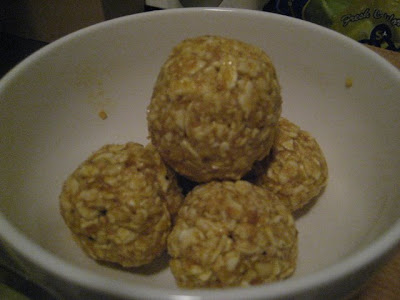 Bring a few quarts of well-salted water to a brisk boil in a medium sized pot. Reduce the flame. You need wet hands for this next part, so if your paws aren't damp and sweaty by nature, run your hands under the sink before proceeding. Form the matzo balls by dropping spoonfuls of matzo ball batter approximately 1-inch in diameter into the palm of your wet hands and rolling them loosely into balls. Gently drop them into the simmering salt water one at a time as not to harm the structural integrity of the matzo balls.

Cover the pot and cook them for 30 to 40 minutes. The resulting matzo balls should expand and bob about on the surface, like delicious Hebrew apples. About ten minutes before the matzo balls are ready, bring the prepared chicken stock to a simmer with some sliced carrot in it. Ladle some soup and a couple of matzo balls into each bowl and top 'em with a couple snips of dill.

A brief note: Jewish cuisine is not known for it's good looks (it's plate appeal, if you will), but the rule of thumb is that the more alien it looks, the better it tastes. Ever try kugel? Looks like playdough but damn if that isn't some seriously tasty eats when prepared properly. 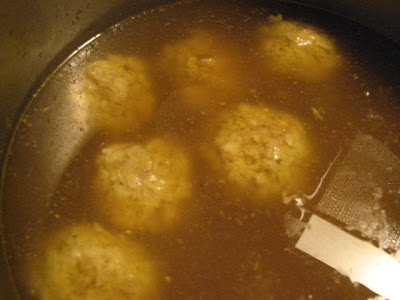 When you're all finished cooking, consume the soup post-haste. We don't mean to make dubious medicinal claims, but there's a good chance that this stuff is capable of regenerating limbs. Enjoy it in good health, and Happy Hanukkah everyone.

Having tried your chili recipe and having been duly impressed with the sights and sounds, you bet your bottom dollar I will try to matzo ball soup.

Question: I am Catholic. Will I still be able to cook this right? Or despite following directions to the letter, will I still find a way to mess it up?

I am Catholic. Will I still be able to cook this right? Or despite following directions to the letter, will I still find a way to mess it up.

Silly, silly Smitty. Haven't you learned that for every rule of Catholicism, there is a rule that allows you to get out of your Catholic obligations? It’s kind of like all those legislative rules that can be suspended at any time for pretty much any reason.

If your Catholicism gets in the way of making the Matzo ball soup, I am sure a little confession will make it taste just fine.

Rickey's soup sounds yummy and I will be making a batch at my earliest opportunity.

hehehe - the idea of someone making matzo ball soup and having a pig outside the door for consuming the scraps from broth making - Rickey is a very funny boy, I must say.

David: hah, curious thing is, Rickey didn't even mean to make a funny there. Sometimes Rickey is unintentionally hilarious.

Smitty: just say a few hail marys, perform some light dinner theater (or whatever it is that you Catholics do) and then go to town.

I am so glad I landed on a site where I can say Happy Holidays!

I get so intolerant of those Put the Christ Back in Christmas folks. So I'll say it again. Happy Holidays!

Looks so good! I'm off to google a picture of parsnips 'cause I don't know what they are. But how come you don't eat the veggies?