On This Day in History... 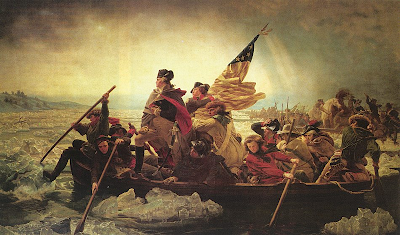 December 8, 1776 On the advance of Earl Cornwallis, General Washington abandoned the city of Newark and retreated across the Delaware River from New Jersey to Pennsylvania during the American Revolution. While standing proudly on rowboat, Washington is overheard to have proclaimed to the Brits: “Ah fuck it, you people can keep Newark!”

December 8, 1854 The fabulous magical mystery tour kicked off as Pope Pius IX proclaimed the dogma of the Immaculate Conception. Ah you wacky Catholics, Rickey has never understood your theatrical little shtick. You people do understand that you’re pretty much worshipping Dracula, yes?

December 8, 1863 President Abraham Lincoln announced his plan for the Reconstruction of the South. Lincoln: justifying the Republican Party since 1864!

December 8, 1941 One day after Pearl Harbor Congress declares war on Japan and enters World War II. Ah yes, the simpler days: when the U.S. had the common sense to go to war against countries that actually attacked us…

December 8, 1949 The Chinese Nationalist goverment proved that they in fact actually were the issue here (man) as they moved from the Chinese mainland to Taiwan as the Communists pressed their attacks.

December 8, 1980 Rock musician John Lennon was shot to death outside his New York City apartment building by Mark David Chapman. To quote Judd Hirsch’s watershed performance in Independence Day: ”All you need is love. John Lennon. Smart man. Shot in the back, very sad.” On a related note, has there ever been a more overt display of Jewishness in a movie than Judd Hirsch’s role in ID4? It’s like the director calmly walked up to Hirsch and said, “Look, uh, Judd, great job and everything, but I need you to Jew it up some more.”

December 8, 1986 House Democrats selected Jim Wright to be the chamber's 48th speaker, who attempted to fill the sizeable shoes of one Thomas P. "Tip" O'Neill. Not for nothing, but that’s a pretty tough act to follow when your predecessor had used brilliant phrases like “an amiable dunce,” “a cheerleader for selfishness,” and ‘Herbert Hoover with a smile” to characterize Ronald Reagan.

December 8, 1987 President Ronald Reagan and Soviet leader Mikhail S. Gorbachev signed a treaty calling for destruction of intermediate-range nuclear missiles. One would assume that at this point, Reagan’s dwindling mental faculties instructed that he be far more concerned with the Jelly Bean gap that existed between us U.S. and Russia.

December 8, 1992 Americans tuned into watch live TV coverage of U.S. troops landing on the beaches of Somalia as Operation “Restore Hope” began. And judging by all these fearsome Somali pirates Rickey reads about in the paper, our little jaunt over there went well, didn’t it?

December 8, 1993 President Bill Clinton signed into law the North American Free Trade Agreement. Meanwhile, in some smoky filled board room, it suddenly dawns on Lou Dobbs that this NAFTA thing might be just be his meal ticket for offering up a steady diet of fear, anger, and resentment on the topic of illegal immigration.

December 8, 1995 The Grateful Dead announced they were breaking up after 30 years of making music. And if anyone can name just one Dead song that doesn’t appear on the Greatest Hits album, Rickey will be downright shocked.

December 8, 2000 The Florida Supreme Court ordered an immediate hand count of about 45,000 disputed presidential ballots. In retrospect, it would’ve seemed much less funny at the time had we not been aware of the systematic destruction of American wealth and prestige that was looming.

..and finally (jumping back a few years)…

That’s right folks, today is a magnanimous day. Today is Rickey’s birthday. Today Rickey turns the ripe old age of 29. Today, the clouds part, the birds chirp and the distance between the devil and the deep blue sea is widened just an extra bit. Well wishes, congratulations, and oaths of fealty should be left in the comments section below.

Yeah, I was embarrassed for Judd Hirsch in Independence Day.

Holla! Happy b-day, Rickey. Mine own special day is this Thursday.

Happy birthday, Rickey! Is wish I could remember 29!

And not to be a recovering Catholic or anything, but the Immaculate Conception doesn't refer to God knocking up the Virgin Mary without even the help of Jodie Foster's as yet to be created turkey baster. It means Mary was born without original sin. After all, you don't want your Jesus gestating in a sinful uterus.

Wow! And I try not to use "vulgarity" very often, but a lot of shit went down on December 8 in history. I never realized.

And, as a Catholic, all I have to say is...um, yeah! But was the Count born without sin? I missed that somewhere.

You're somewhat of an enigma.Unless I'm confused (which is the norm), didn't you write a post last year that implied you were much younger?

It's my son's 6th birthday today as well, so happy birthday to you both. Did you want an automatic Nerf Blaster Machine Gun? If so, I got two - you're more than welcome to drop in for cake and to fire off a few rounds at his older brother, aka moving target.

RMatlack: Nerf weaponry? Hold tight, Rickey will be right over.

George: Your mind bogglingly creative blasphemy is an inspiration to us all.

Now if you'll excuse Rickey, he's off to he best goddamn steakhouse in the world with Ms. Henderson.

Happy Birthday Rickey, seems like you chose quite a date to enter the world.

Its the only Dead tune I like. Off the live double-album ("Dead Set?" I don't fucking know, I only listen to the one song.)

Get your ass to my site, Rickey.

Anyhow, funny stuff about Judd Hirsch. I think there's a director's cut where you can see his horns.

And as to being able to name any Dead songs, well, let's just put it this way. I don't know what's on their greatest hits collection, but could probably name all those songs anyway, just running down a list of songs off the top of my head.

I assume you don't want me to go there, so I won't.

My B-day is this Saturday.

Congratulations Ricky....May you have many more!

My B-day is this Saturday.

Jesus, another one. Well, since we're all here, can we all agree that birthdays this close to the holidays completely suck?

You're right. Here's how high I was when I read your DOB last year... I did the math and it came out that you were 18, not 28! I feel much better knowing you're not such a smart 18 year old.

can we all agree that birthdays this close to the holidays completely suck?

I always loved having a birthday this time of year when I was a kid. Just lots of fun all month long.

Dude, you so stole my schtick with this "On this day in history" bit. And did it better than me, too. So happy belated birthday, asshole ;-)