Introducing Your Next Surgeon General...

"President-elect Barack Obama has offered the job of surgeon general to Dr. Sanjay Gupta, the neurosurgeon and correspondent for CNN and CBS, according to two sources with knowledge of the situation." --The Washington Post, 1/6/09

Ah, quite crafty Mr. President-elect, reaching out to the media for your administration members. Rickey will see your Gupta and raise you a House! Join Rickey now, as he makes a leap into the realm of the imaginary and takes this story to it's logical conclusion...
~~~~~~~~~~~~~~~~~~~~~~~~~~~~~~~~

Barack Obama: Good morning. In recent weeks, we announced our economic and national security teams, who are working as we speak to craft bold new initiatives to grow our struggling economy and keep us safe. Today I'm pleased to announce my choice for Surgeon General, whose work as spokesperson on matters of public health will be pivotal to our nation's well being. My fellow Americans, I have selected Doctor Gregory House to serve as Surgeon General. Yes, I realize that he is an unorthodox choice. He is an anti-social cantankerous pain killer addict. He is a notorious sex fiend with only half a muscle in his right leg. And yet his witty and arrogant medical practices have proven invaluable time and time again. I look forward to seeing him put his bold behavior to good use in his new capacity as Surgeon General. Now, before we take a few questions, I'd like to invite Dr. House to say a few words. Dr. House? 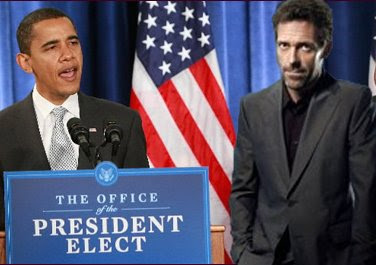 House: Thanks Mandingo. Hello America, I'm House, M.D. Did you know that less money is made by biochemists working on a cure for cancer than by their colleagues struggling to find ways to hide steroid use? True story. Also, have you ever watched "Gilligan's Island" reruns and really, really believed that they're going to get off the island this time? [reaches in pocket for a bottle of vicodin] Oh, there you are old friend. Were you scared? It's OK, you're home now. [pops a pill]

Obama: Uh, thanks Dr. House, and now we'll take some questions from the press. First?

House: Look, we all know that this is a big deal. Big tobacco needs to be reigned in. But let's not forget the real cause of lung caner: tiny unicorns goring holes into our air passages.

Suzanne Malveaux: Can you clarify that last statement? Does that mean you'll expand the Surgeon General's warning on the packages of all tobacco products?

House: Sure, why not? On an unrelated note, you are an evil and cunning woman. I find this to be a massive turn on.

Bret Baier: Dr. House, is it true that you once performed an autopsy on a living person?

House: Physician-patient confidentiality protects me from annoying conversations like this. If you must know, yes, but I brought her right back and was able to successfully cure her tonsillitis. Also, I was high as a kite at the time.

Bret Baier: But why would do you that?

House: Because I'm a mean son of a bitch. Duh. Are you being intentionally dull? 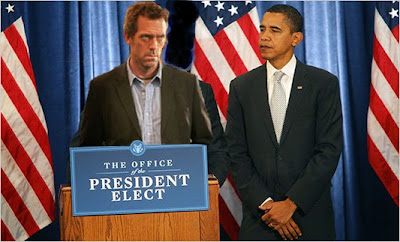 Julie Mason: Dr. House, what is your stance on sex education in the United States?

Julie Mason: What about sex?

House: Well, it might get complicated. I mean, we will be working together--you as a member of the press and me as the Surgeon General. Things might get messy, but I'm willing to give it a shot. I am older, certainly, but maybe you like that.

Julie Mason: I was referring to your policy on sex-ed, Dr. House.

David Gregory: Dr. House, Do you have any planned initiatives to teach our nation's youth about the importance of physical fitness and avoiding sugary foods?

House: Oh absolutely. Let's get those roly poly teenage girls back in shape so that they can get down to the important business of being skinny and unattainable. Moreover, I'm thrilled to have the opportunity to teach prepubescent kids that truth matters, God doesn't, and life generally sucks.

Jim Axelrod: So you're an atheist?

House: Only on Christmas and Easter. The rest of the time it doesn't really matter.

David Broder: Dr. House, as Surgeon General, what advice would you have for families who cannot afford dental coverage for their children?

House: Go make friends with your local neighborhood dentist. He can give you a note, and maybe a little nitrous to take the edge off. 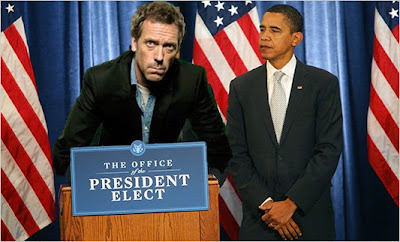 Richard Wolffe: Dr. House, have you even read the job description for Surgeon General?

House: I started, but I found the characters to be rather two-dimensional.

Steven Myers: So it's safe to say that you've done absolutely nothing that qualifies you to hold the position of Surgeon General?

Trude Feldman: Dr. House, what about your obvious addition to pain killers?

Dr. House: What's the big deal? They let me do my job. And they take away my pain. I pay my bills, I make my meals. I function. I'm not an addict. Sure, I've changed over the years. I've gotten older. My hairs gotten thinner. Sometimes I'm bored. Sometimes I'm lonely. Sometimes I wonder what it all means.

Les Kinsolving: Dr. House, did your pager really just go off or are you trying to dodge this press conference?

House: Why can't both be true? See everyone at the Senate confirmation hearing! [exits stage]

Labels: Bill Richardson is a large man to photoshop out, Politics (well sort of), Theater of the Imagination

Ah, so you've started watching "House" finally? Nice use of his best one-liners from the show. I love how 80% of that stuff was directed at Dr. Cuddy on the show.

Yeah, Rickey occasionally likes him some "House." It gets formulaic, but it's pretty witty stuff. (and no, there's no shortage of snarky one liners from House).

Chief likes House big heap. But thinks Jack from LOST would have been better pick.

I want to know exactly what position Jack Bauer will have at Homeland Security. That is what's bugging me today.

Oh, please do a Jack Bauer/NSA bit. The masses are teeming for it.

Jack Bauer as NSA is too easy. You gotta put him in charge of something atypical, like Postmaster General. Rickey, you mind if I take a stab at that over at The Jack Sack?

If you think Dr. Jocelyn Elder got canned fast for mentioning masterbation, imagine how House would put it. Maybe he would be blunt eneough to get away with it. He'd say something like:

"Wouldn't you rather your kids whack it or rub one off rather than knock each other up or pass some crazy disease around? Shit, you know they are doing it anyway."

I don't watch "House," but Mrs. Muskrat does, and I gather that he would say the things you say he'd say.

I met Dr Gupta on a tarmac in Kuwait City in spring 2003 while we were surrounded by mangled bodies and TV cameras. I watched a nurse lie to him and take credit for being the pilot. All that being said, he seemed like a nice enough guy. Neither of us liked the heat or the propwash coming off the C-130 engines.

My friend Mike works at CNN and he plays racquetball with Gupta. He says Gupta is mad cool.

Did you just get through an entire bit on House without mentioning Lupus?

Amazing. You spent all that time Photoshopping! Fine job, btw.

Smitty: bah, a maverick like Jack Bauer has no place in the lily livered Obama cabinet. Also, Adam's right, it is a little too obvious... An interesting article on the politics of 24 can be found here however.

George: didn't take long at all actually. (Although the first two were pretty mediocre). Rickey doesn't want to get too good with photoshop... Otherwise Ms. Henderson will make good on her demand that Rickey creates a monogram for the wedding.

Bob: hah, yes, he most definitely would. Funny stuff sir.

Muskrat: well who does like the heat of the propwash coming off the engines of a C-130? Come on now!

Sinisterdan: good catch. Not only did Rickey omit a joke about lupus, but he completely forgot to include the "everybody lies" line. Damn.