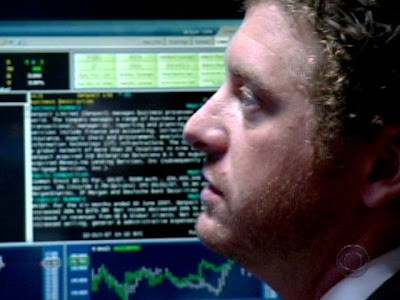 Hey there Wall Street savvy folks, are you currently reeling from stock market woes? Worried that your investment portfolio is far too lean to weather today’s shaky financial climate? Well then fret not dear reader, because Rickey has all your problems solved. Below are a few sage pieces of advice that Rickey has deemed invaluable to your economic well being. Ignore these pearls of wisdom at your own damned risk.

Befriend A Mentally Disturbed Mathematical Genius. Although he lies awake at night writhing from insomnia and the mental anguish of incessant equations and unsolved problems bequeathed by long-dead, equally tortured mathematicians, this poor soul can be your gateway to untold riches. Stop by his dilapidated hideout at least twice a day to remind him to eat and bathe in between pondering the great enigmas of numerology, and you will have sufficiently gained his trust to tell him you require his expertise for playing the market. Then he will proceed to lay out all the stock pages from the last year, glue them to the walls, ceiling, and floor of his apartment, at which point connections and correlations will erupt like chain lightning in his delusional, but brilliant brain. Behold: a bulletproof stock portfolio!

Learn How To Interpret The Federal Reserve’s Cryptic Body Language. While Ben Bernanke is careful to keep his lips sealed lest the markets be upset by some verbal gaffe, his hips, much like Shakira’s, don't lie. While Bernake is widely expected to lower rates yet again in the near future, Rickey suspects that his body language is telling a much different story. Perhaps it is saying: “You. American investors. I refuse to bail you out of this one, you irrationally exuberant fuckheads. Like a vengeful Norse god, I am going to punish you by raising interest rates and nipping inflation in the bud. You will thank me later.” (And of course this will be your cue to start shorting bonds and t-bills at the current rate).

Incorporate Yourself Under A Chinese Name. Thanks in no small part to Lou Lou Dobbs' shrill warnings, everyone knows that China's growth rate is going to be double that of America's for the next few decades. What most Americans do not know, however, is anything about China other than the fact that they’re trying to conquer the world by slowly killing us. So why not beat ‘em at their own game? Start making some poisonous but brightly colored children's toys and maybe some toxic tater-tots for good measure (because in Idaho, if it’s not tater-based, then they're fucking stumped). And while you're at it, just go ahead and just name your company the Kung Fu Manchu Ding Dong Huey Looey N. Dooey Bruce Lee Manufacturing Company. (Otherwise people won't know it's Chinese).

Pull Out Of Defense Industry Stocks, Pronto. With a peace mongering Democratic President inbound, the financial outlook is looking rather grim for an industry that prides itself in its ability to find new and creative ways to blow shit up. (Rickey's heartfelt apologies to the good folks at Northrop Grumman). Here's a radical idea: why not invest in something that is becoming increasingly finite that people will always require? Water, perhaps? Wait was that actually an intelligent recommendation? Rickey’s bad—it won’t happen again.

Invest Heavily In Beer. (Not the stocks, the actual thing). If you’d invested $1,000 a year ago in say, uh, Worldcom, you’d have precisely zilch left from your original investment. However, if you’d invested that same $1,000 in beer consumption over the course of a year and recycled all the cans/bottles at your local supermarket, you’d have a few extra bucks in your pocket—a whole hell of a lot better return on your investment if you ask us. And hey, you get to drink the beer too!

Let all of the authors over at Around the Keg commend you on your sound investment advice.

We are particularly thrilled at your suggestion of investing in beer. We applaud it not just in words, but by actually giving it a standing ovation in our offices.

For those who wish to follow your sage investment advice on beer, please allow me to direct your readers here, where they can preview many of their "stock options" before they decide to buy.

You, sir, deserve a medal.

Don't feel too bad for your friends at Northrup... it's Boeing who's suffering after that last military contract was awarded.

I never dreamed of the day I'd see someone compare Ben Bernanke to Shakira. But if someone told me that if I ever saw it, it would be from the mouth of Rickey, I might have considered the possibilities more closely.

Smitty--Many thanks. As a soldier in the war on poverty, Rickey's just doing his part to keep the economy strong and his readership soused.

Deb--Boeing cares not about losing a midair refueling contract. It's that 787 vs Airbus thing that's going to be their big test.