Rickey Presents: "The Carnival of Bauer" 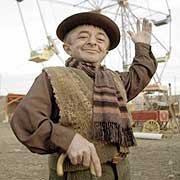 This week, “Riding with Rickey” is bemusedly proud to host an event known as “The Carnival of Bauer.” Each week, “24” fans (read: supreme nutjobs) post articles pertaining to all things Jack Bauer related and one unwitting blog gets to host the madness. In a state of severe inebriation, Rickey thought it would be a terrific idea to throw his name in the hat over at Blogs4Bauer to host this week’s carnival. And that’s how we arrived at this very tragic and bewildering point. Please bear in mind that the observed etiquette at this carnival is no different than any other carnival: keep your children very close at all times, don’t touch or eat anything, and under no circumstances make eye contact with carnival employees. (Seriously, it’s for your own damn good). Some of these people appear to believe that they're actually Jack Bauer. Enjoy the craziness that ensues below—Rickey’s going to go outside and shout at traffic.

Meanwhile, we here at Riding with Rickey are more than happy to serve up your weekly “24” recap. Stand up and take it like a man, even if you ain’t.

The always adorable rightwinger Little Miss Chatterbox presents 24's Joel Surnow posted at The Chatterbox Chronicles. A word of caution: if you look at her blog, you'll see that this blogger's political heroes are Ann Coulter and Peggy Noonan and she lists her favorite book as "How Ronald Reagan Changed My Life." In other news, Rickey's testicles just receded back into his stomach.

Let's move away from the unnerving political extremism for a second to see what the sublime Obi's Sister offers up Darth Bauer posted over at Obi's Sister. Bonus points to this chica for pointing out that Paul McCraine also played Leonard Betts, the cancer-eating badguy on an X-Files episode. Congrats on snagging what an acquaintance of mine termed the "Oddball Internet Discovery of the Week" award here at Riding with Rickey. Your two pounds of assorted smoked fish are in the mail.

The folks with the bubblewraped furniture over at MediaShuffle serve up a terrific dose of crazy, posting a Jack Bauer Update at MediaShuffle. But don't let me down King Tom, you know you can top that craziness...

Indeed! Not wanting to be outdone on the craziness richter scale, King Tom dons his safety helmet, scampers to the computer, and presents Tis the season of treason which can be found at King Tom's Kingdom.

Looking for some more insane ranting? Check out Michael's entry, where he gives us: NFL Playoffs + 24 = Excellent Television posted at Aids Has Yet to Find Me. Uh, terrific domain name there Mike. I'm guessing you didn't have to fight anyone for it?

For some inexpicable reason Angela Mitchell decides to talk about her mother an awful lot in Because he's Jack Bauer! (The return of 24...) posted over at Paranoid Pop -- TV, Movie, Pop Culture Obsessions, and Bringing Them to Life. Angela, your mom's still alive, yes? You're not wearing her severed head as a hat, right? Right?

Kyle Brandt, lay some crazy down on us! Kyle, only too happy to comply, presents K.B. Spends the Day with J.B. - Hours 8 & 9 posted at KyleBrandt.com.

Finally to wrap things up, Rickey has just been informed that one of the organizers of the "Carnival of Bauer" has a buddy whose wife works for Degree, the deodorant maker. Ok, so what's the point you ask? Well evidently Degree is doing some kind of cross promotion with 24. Yeah. Anyhow, much to Rickey's horror, he's now legally mandated to shill for an antiperspirant company and inform you that episode 3 of CTU: The Rookie has been posted. Damnit, this is not what I went to college for. Ugh, I feel so dirty right now.

In conclusion, Rickey would like to thank all the miscreants who contributed to this week’s “Carnival of Bauer”. (You have no idea how freaking hard it is to type that with a straight face). Please excuse all the taunts that Rickey felt necessary to dispense. Remember: despite your rat-like appearance, you carnies are indeed kings among men. Keep up the strong work, and come back and visit often. We'll leave a light on for you and some boiled cabbage in the fridge.

Thanks for the link...This was a great post! You can keep the fish, tho...and the cabbage.

I laughed reading the post, so I'm sure I'll enjoy reading all the posted posts you posted. Oy that's a lot of p's.

If Rickey knows one thing, it is that the ladies love smoked fish.

If Rickey knew more than one thing, he wouldn't have tried to make a comeback last season

There's nothing wrong with an old guy still trying to push himself. Look at Julio Franco. And you can't tell me that Rickey's Baseball Hall of Fame acceptance speech isn't going to be the best damn thing you've ever heard.

Thanks for the love, brother. Now, go steal me some web-traffic!

Lou, if you have any booze in the house, use it!

Thanks for the link, Rickey.

Hope you get those cleats you've always wanted!!

Diapers? I know I'm a lunatic, but diapers? Who told you?

Thanks folks--Rickey's a sucker for compliments.

And you can't tell me that Rickey's Baseball Hall of Fame acceptance speech isn't going to be the best damn thing you've ever heard.

I count the days.